Hoeing It is critical to keep hoeing over the next few months. This will stop the weeds growing and competing with your plants for space and nutrients. Weekly hoeing will also bring slugs and other pests like saw fly larvae to the surface for the birds to eat.

Aphids Keep watching for aphids on the new growth – black fly love new broad beans shoots. Wipe them with your fingers or spray them with seaweed extract.

Sowing indoors Some plants would be vulnerable to temperature drop outside and still need to be started off indoors. They are runner beans, squashes, courgettes, florence fennel, cucumber and tomatoes.

Potting on Once seedlings have developed a couple of true leaves they need to be transferred to three-inch pots of good potting compost which will contain nutrients for the developing plants. Hold the plants by the leaf (not the stem) and use a pencil to leaver them gently out of the pot taking care not to damage the roots.

Pearlite added to the potting mixture (10/20%) opens up the soil texture so that it drains well and avoids the moulds that cause damping off.

Mice and birds It is advisable to germinate sweet peas, broad beans, sweet corn and runner beans indoors to avoid them being eaten by mice or birds.

Timing When growing indoors in pots or trays watch out for the roots and plant them out just before they begin to grow through the bottom of the pot. This will mean that you maintain steady root development in the transplanted seedling.

Fleece Until early June small plants are vulnerable to sudden early morning temperature drops. Watch the weather forecast and be ready to cover with fleece, straw or shredded paper.

Earthing up potatoes When potato plants are 23cm tall draw soil up around potatoes in ridges. This will ensure that the tubers are not exposed to light. Leave 10cm of foliage to ensure continued growth.

Strawberries Strawberry plants will only fruit well for 3 years, so it is worth renewing 1/3rd of your plants each year. New plot holders wanting a crop this year could buy established plants from a nursery.

Climbing beans Using 8ft canes build a one and half metre wigwam or a traditional 75cm wide apex structure. The optimum spacing between growing canes is25cms so that plants are not overcrowded.

Beans are hungry feeders and need to be planted into prepared, well manured soil or top dressed just before planting.

Bees and other pollinators A recent study at Bristol University has shown that allotments are very successful in supporting a wide variety of pollinators because of their mix of fruit,veg and flowers, with allotments having ten times the bee population of parks. Sow some pollinator friendly flowers on your plot this month to encourage pollination of your crops and help the bee population. 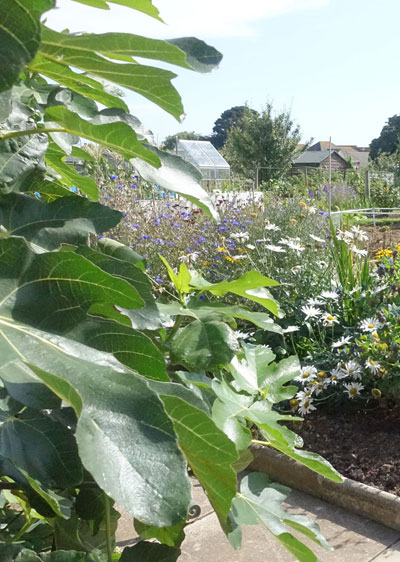